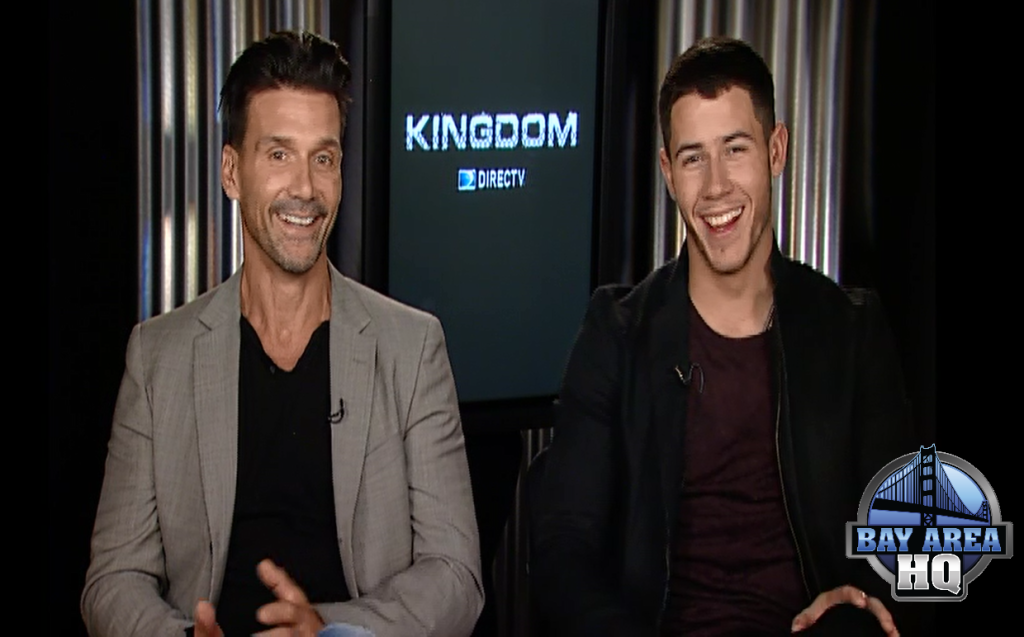 You’ve never seen performances like this from Nick Jonas & Frank Grillo. “Sons of Anarchy” meets the MMA world in “Kingdom,” and Bay Area HQ’s Bobby B is onhand to talk to the stars of this authentic and intense family drama.
A must-watch interview, you’ll hear everything you need to know, and, of course, some fun questions thrown in, courtesy of Bobby B. Check it out!
“Kingdom”  is a DirecTV Original Series & Airs Next Wednesday, October 8, at 9PM.

Kingdom is a visceral family saga that takes place in Venice,California and is set against the backdrop of the renegadesubculture of Mixed Martial Arts (MMA). It is a world rife withcomplex characters and relationships that unfurl in surprisingand deeply human ways. Byron Balasco is creator, executiveproducer and showrunner.
The Kingdom cast stars Frank Grillo (Captain America: The WinterSoldier; Homefront; Warrior) as Alvey Kulina, a Mixed Martial Artslegend and owner of Navy St. MMA gym based in Venice, CA;Kiele Sanchez (The Glades; Lost) as Lisa Prince, Alvey’s girlfriend;Matt Lauria (Friday Night Lights) as Ryan Wheeler, the world-classathlete who had it all, including Lisa Prince, until his spiralingdrug addiction landed him in prison; Jonathan Tucker (Parenthood)as Jay Kulina, Alvey’s eldest son; Nick Jonas as Nate Kulina, Alvey’syoungest son and the prized fighter at the gym, and Joanna Going(House of Cards; Mad Men) as Christina Kulina, Alvey’s estrangedwife and mother of Jay and Nate.
When word gets out that superstar Ryan Wheeler is trainingwith Alvey, Navy St. MMA gym begins to gain some attention.Finally, Alvey begins to taste a bit of the glamour to go with thegrit. He is willing to go through extraordinary means to make
sure his fighters are taken care of, but all of this success andresponsibility comes at a steep price. Despite Lisa’s pleas toAlvey not to let her ex train at the gym, suspecting he has ulteriormotives and knowing her feelings for him are unresolved, Alveylets the wolf in the door on the grounds that his relationship withLisa is solid and the belief that Ryan is ready to redeem himself.Ryan, however, is not the only superstar at Navy St. MMA makingheadlines. Lisa’s reputation as a savvy businesswoman isbeginning to grow beyond the walls of the Navy St. MMA gym.She is approached by investors who want to put money intoAlvey’s gym and it may be impossible for her to say no. Is hiscomeback truly about wanting to make amends or will too muchfame, money and access threaten Ryan’s intentions and his returnto glory? For Jay, if he can start earning money by getting backinto the cage, he might be able to get his mother Christina off ofthe streets and settle the score with the guys who assaultedhis brother Nate, who is forced to take a hiatus from fighting torecover from his injuries.
Bay Area HQBay Area Sports & EntertainmentDirecTVFrank GrilloKingdomMMANick Jonas

Watch Bobby B and others interview Nikki & Brie Bella, The Bella Twins. If you love these Total Divas, you will LOVE this interview!…