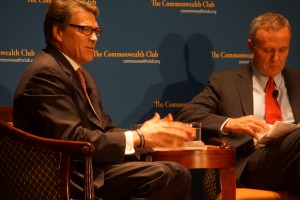 Bay Area HQ was onhand to see Texas Governor Rick Perry at the InterContinental Mark Hopkins hotel in San Francisco. You can watch our video of his full speech here, but later, in a sit-down with the moderator, things got a bit controversial.
When asked whether he considered homosexuality to be a disorder, he replied: “Whether or not you feel compelled to follow a particular lifestyle or not, you have the ability to decide not to do that,” he said. “I may have the genetic coding that I’m inclined to be an alcoholic, but I have the desire not to do that, and I look at the homosexual issue the same way.”

Limited Tickets are available to see Will Sparks and Lost Kings spin at Ruby Skye for the venue’s 15th Anniversary Weekend on Saturday, May…