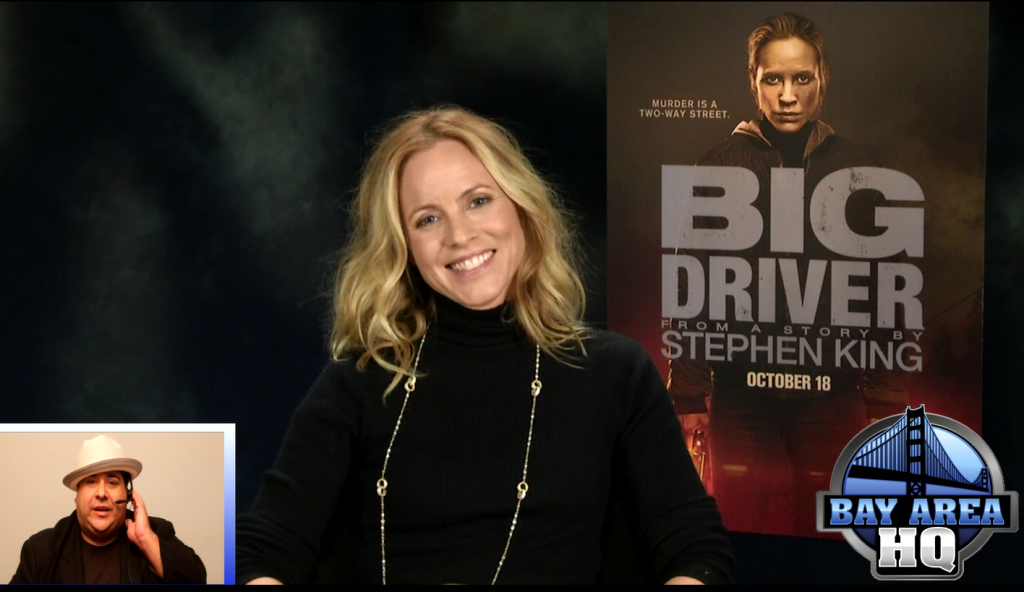 Check out Bobby B’s interview with the amazing & beautiful Maria Bello, who tells us her personal feelings on revenge, how she feels about working with the great cast, her favorite Stephen King work, and what it was like to step in the shoes of female victims of violence all around the world. Watch her in the Lifetime Original Movie, Big Driver, (#BigDriver) premiering on Saturday, October 18 at 8pm ET/PT. The TV film is from a story by best-selling author Stephen King and marks the first collaboration between Lifetime and King. This dark story of a young novelist hell-bent on revenge after falling victim to a brutal crime stars Golden Globe nominee Maria Bello (A History of Violence, McFarland), Academy Award winner Olympia Dukakis (Sex & Violence, Steel Magnolias), Grammy nominee Joan Jett, film and television veteran Ann Dowd (The Leftovers, Masters of Sex) and Will Harris (NCIS, Sky High).

In Big Driver, Tess Thorne (Bello), a famous and revered mystery and thriller writer, faces a long drive home following a book-signing engagement. But while driving on a lonely stretch of New England road, her tire blows out, leaving her stranded. Relieved when another driver stops and offers assistance, Tess quickly discovers her savior is actually her assailant, a serial killer who repeatedly assaults her. Left for dead in a drainage pipe to rot with the bodies of his other victims, Tess escapes and makes her way safely home. With her fragile mind beginning to unravel, she is determined to find her rapist and seek revenge, as payback is the only thing holding her together. Dukakis will portray Doreen, while Jett will play Betsy Neal.

Best-selling author Stephen King has penned more than 50 novels and hundreds of short stories, many of which have been adapted into feature films, including Frank Darabont’s Academy Award-nominated The Shawshank Redemption with Morgan Freeman and Tim Robbins; the Stanley Kubrick classic, The Shining, with Jack Nicholson; and Stand by Me, directed by Rob Reiner starring River Phoenix, Kiefer Sutherland, Jerry O’Connell, Corey Feldman and Wil Wheaton. Other works based on his stories include the television series Under the Dome, as well as numerous top-selling comic books, including The Stand and The Dark Tower series. His novels have sold more than 350 million copies worldwide and have received a multitude of awards, including The Bram Stoker Award, Los Angeles Times Book Prize, National Book Award, National Magazine Award and World Fantasy Award.

Maria Bello has captivated audiences with her many diverse roles in such films as The Cooler with William H. Macy (Golden Globe and SAG Nomination), David Cronenberg’s A History of Violenceopposite Viggo Mortenson and Ed Harris (NY Film Critics win and Golden Globe nomination), OliverStone’s World Trade Center, Thank You for Smoking, and The Jane Austen Book Club. In addition, she co-starred with Brendan Fraser in The Mummy 3: Tomb of the Dragon Emperor, in Alan Ball’s controversialfilm Towelhead, and opposite William Hurt in Yellow Handkerchief.  In recent years, Bello has played opposite Michael Sheen in Beautiful Boy, Adam Sandler in the hit comedy Grown Ups, and Taylor Lautner in Abduction; she also took a lead role in the John Wells drama The Company Men.  Her upcoming films include roles in Paul Haggis’s Third Person, and Prisoners opposite Hugh Jackman, the untitled James Wan thriller.

Bello is also an internationally renowned activist and one of the world’s most powerful voices for socialjustice and women’s rights around the world, with a special focus on Haiti.  She is the co-founder of WeAdvance, a women’s movement and NGO based in Cite Soleil, which advocates for women throughoutthe country to have full political, economic and social participation.
Since 2008, Bello has worked in Haiti with Artists for Peace and Justice and Femmes en Democratie,where she raised funds and produced a women’s media campaign for the elections in 2010, andspearheaded the opening of a women’s clinic in the Petionville Camp immediately following theearthquake.  Bello is also a member of the Clinton Global Initiative and works on gender policy withinthe Haiti Network.  She has been named a Vital Voices Global Ambassador for women and participated in the first ever Vital Voices/Bank of American International Women’s Conference in Haiti.

Bello speaks around the world on social impact investing, Haiti, and women’s rights.  In 2012, she was a keynote speaker at the State Department’s Forum on Impact Investing and was also awarded with the Starkey Foundation’s “So the World May Hear” Award.  She was named the Goodwill Ambassador for Women in Haiti and leads President Martelly’s Council for Investments in Haiti on a committee for women’s empowerment, social business and poverty alleviation with Nobel Peace Prize winner Muhammad Yunus.  Bello is currently speaking at Tedx and other venues in the world about the “newwomen’s revolution” and impact investing for women.  Bello is also the founder of the new website WeAdvance University, which aims to connect and empower women in Haiti and throughout the world, andshe is a partner in the company Socme Academy, which powers the site.  Along with her Haitian colleagues, she is building the first women’s co-op bakery in Marigaux, Haiti.

She began her career as an activist at Villanova University, where she majored in Peace and JusticeEducation and worked at the Women’s Law Project in Philadelphia.  She started her first NGO, TheDreamyard Drama Project in Harlem in 1997.  In 2009, Bello was voted on of Variety’s most powerful women in Hollywood for her activism with women in Darfur.
Big DriverLifetimeMaria BelloRevengeStephen King